Naijanewshub.com.ng reports that the Abrahamic Mission, a Non Governmental Organization of Al-Habibiyyah Islamic Society, a Faith Based Organization in its efforts to ensure a peaceful and rancour free polls at the forthcoming 2023 general elections engaged critical stakeholders through inter-faith peace summit that was held at the University of Ibadan Conference Center, Ibadan. 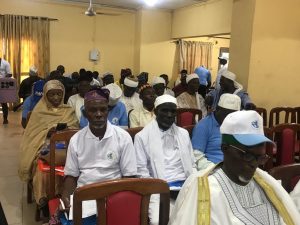 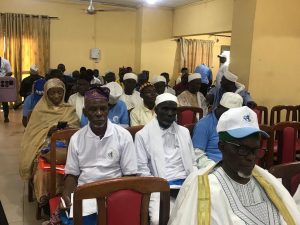 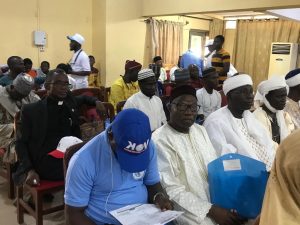 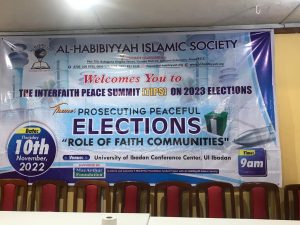 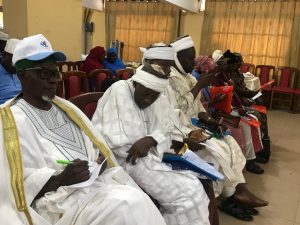 The summit according to the organizer was to bring diverse people to the discussion table on issues bordering on the peaceful prosecution of the 2023 general elections.

The summit had in attendant some Political Parties Chieftains, Department of State Services (DSS), The Nigeria Police, Independent National Electoral Commission (INEC) officials, The National Orientation Agency (NOA), Nigeria Supreme Council for Islamic Affairs (NSCIA) and Christian Association of Nigeria (CAN) and some faith based communities will be in attendance as discussants.

The discussants at the event delibrated so much on the theme of the summit which is, Prosecuting Peaceful Elections “Role of Faith Communities”.

Speaking with journalists, shortly after the first season, Imam Fuad Adeyemi, the National Chief Imam of Al-Habibiyyah Society said we are here today to discuss about the tips on 2023 elections and this means the inter-faith summit on 2023 elections. This means that all the major stakeholders need to come together and see what we are going to do to ourselves to ensure that we have peaceful elections.

He further said that, We know that Nigeria is highly a religious country, and if you want to achieve success in any thing, you need to pass through religious houses, so that is why we are bringing the inter-faith, the Muslim, christians and other religious bodies together. Our God talks about it in our books about living together in peace, so we want to look at it about what the religions taught us about living together in peace.”

“We also talked about what are the things that need to be out in place to achieve a successful elections, so those who are here will take the message to those who are not here, so our takeaway and our expectations is that our religious leaders here will take our message here to their various people out there and instruct or advise their congregants on what to do and what not to do before, during and after elections.”

“Like I said earlier that since we are religion people we should be able to look at it from a religion point of view, not everything you seek for that you get, we should be able to train ourselves from that angle and secondly the media should also help in taking the message to the grassroot so at the end of the day people will be able to be conscious of everything they do before, during and after the elections so that they will do things with the fear of God.” Imam Faud said.

Also in his remarks, Rev. Dr. Daniel Kayode Kolawole second vice CAN chairman representing the CAN chairman of Oyo state said, “I really appreciate the organizer of this summit for this program is very timely and very critical at a time like this, looking at the past elections, these are periods of violence in Nigeria, because people want to get to power at all cost, everybody want to get there, but with the kind of program like this, people will be sensitized, the youths, the adults, the male, the female, not excluding the media, so this gathering will help in preparing the minds of our people on how to have violence free election in 2023.”

In his contributions, Professor Kamil Koyejo Olosho a retired Professor of Arabic and Islamic studies, and one time head of department Arabic and Islamic studies University of Ibadan, who also doubled as the currently the Chief of Staff of Oyo state Muslims in his words said, “It is in the character of Al-Habibiyyah Islamic society to organize gender peace, gender harmony, and brotherhood and part of that is what we are doing here today, sensitizing the stakeholders about the necessity of conducting the next general elections in peace without any rancour and without much ado.”

“My advise is the theme of this seminar which says that all of us must see ourselves as brothers and sisters irrespective of our political linage, irrespective of tribal affiliation or religious differences that is the purpose of this summit and we hope that at the end of it message will sink into the system of the stakeholders and we will have peaceful 2023 elections and a good government that will translate into beneficial governance.” Professor Kamil said.