Naijanewshub.com.ng reports that the second term bid of Governor ‘Seyi Makinde of Oyo State received a massive boost on Friday, as the Council of Obas in the state declared its support for the governor, stating that the good works being done by the administration across the state should continue beyond 2023. 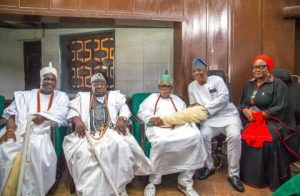 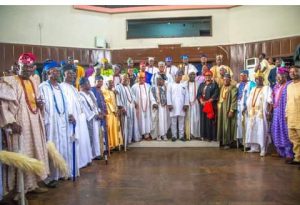 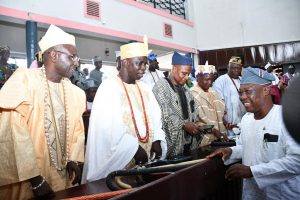 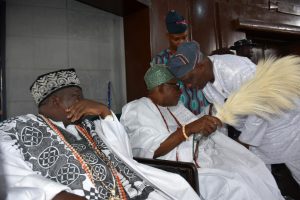 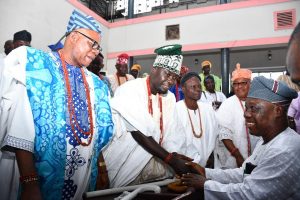 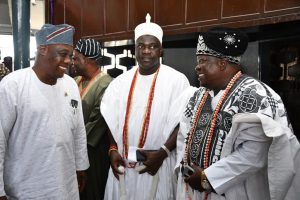 The royal fathers, who converged on the House of Chiefs, Secretariat, Agodi, Ibadan, lauded the governor for delivering good governance, building infrastructure and for defending the interest of the residents of the state.

Speaking on behalf of the royal fathers, the Olubadan of Ibadanland, Oba Dr. Mohood Lekan Balogun, who spoke through the Osi Balogun of Ibadanland, High Chief Lateef Adebimpe; the Okere of Saki, Oba Khalid Olabisi and the Olugbon of Ile Igbon, Oba Fransis Olusola Alao, maintained that they are proud of the governor over his massive achievements in office in the last in a little over three years.

A statement by the Chief Press Secretary to the governor, Mr. Taiwo Adisa, indicated that the Acting Governor of Oyo State, Barr. Abdulroheem Bayo Lawal, who received the traditional rulers on behalf of Governor Makinde, praised the royal fathers’ resolve to support the continuity of good works being done by the governor, promising that the administration would not relent in delivering good governance to the state.

Lawal, who stated that the royal fathers and not the government called the meeting, thanked the monarchs for recognising the good works of the administration.

According to him, the media has a duty to let the world know that Obas in Oyo State saw the achievements of the governor in the last three years and chose to pay a courtesy visit to commend him and declare their support for him beyond 2023.

Some weeks ago, we had this kind of gathering, Obas from Oke Ogun came to pay a courtesy visit to the Deputy Governor and to say thank you to the administration for the massive and unprecedented developments in Oke Ogun since this government came into office in 2019.

“By the special grace of God, we the people of Oyo State, will re-elect the governor. Truth is, there are a lot more projects that need to be done and we believe someone like him would deliver because he can be trusted.

“Before now, when we were coming to Ibadan from Oke Ogun, we used to come with two different clothes because of the situation of the road but now, the Moniya-Iseyin road was fixed less than a year after Makinde came into government.

“In Yorubaland, we believe in rewarding good work with good deeds and that is why we will work to re-elect him in 2023. “We are happy with the good works the Governor is doing and we are here to show gratitude to him.

“In a little over three years, the Ibadan-Iseyin Road has been delivered; construction works on Oyo-Iseyin Road, Ogbomoso-Iseyin Road and Saki-Ogbooro-Igboho Road are all ongoing.

“On the Saki Township Road, one governor started and abandoned it and when we complained to him that the abandonment of the road was making our people to die of respiratory diseases due to dust, that governor told us that our wives should be pouring water on the neglected road. “The road has now been fixed by Governor Makinde within one year.

“For decades, Oke Ogun had no other higher institution except the Polytechnic in Saki.But this administration came in and gave us a university in Iseyin. Some people may say it is just a campus, but we know the import of that development.

“In Saki, there was no solid government hospital. But this government has established a world-class specialist hospital in Saki and equipped it.”

Similarly, the Olugbon of Orile Igbon, Oba Alao, maintained that “it takes a good leader and a prudent administrator to achieve everything Makinde has been doing in Oyo, stating that traditional rulers in the state have resolved that the governor has been doing and should be allowed to continue in office.

“We Obas looked at it that it is right that we should convene this kind of meeting to appreciate our governor and declare our support for him.

“I used to be an accountant before I became a king. With my knowledge of accounting, I know the economic challenges we are facing as a nation and I know that it takes a good leader, a prudent and skillful administrator to do what the current government has done so far in Oyo State.

“We are aware that other governors in the states are owing workers’ salaries but Governor Makinde is not owing civil servants.

Not only that, he pays salary and pension every 25th of the month. I need everybody here to know that we have not come to do politics but to talk about reality.

“We are not driven by emotions and sentiments but by Governor Makinde’s excellent performance. “So, we can assure that we will work tirelessly for the re-election of the governor in 2023. God will help you and we will give you the needed support.

“As close as I am to the governor, I may not get something for myself, but I know the larger interest of the people of Oyo State is a priority to this government. :He is Omoluabi-personified.

“So, Acting Governor, we are telling you and sending you to the Governor that we as Obas will give your administration support to continue the good works you are doing.”

High Chief Adebimpe, who spoke on behalf of the Olubadan, Oba Dr. Balogun, who was also in attendance at the event, said the state has, indeed, witnessed unprecedented development under the leadership of the incumbent governor.

Olubadan, who maintained that the Ibadans always see and commend good works and that Governor Makinde, who is a true son of the soil, should be allowed to continue in office.

In his response, the Acting Governor, Barr. Lawal, appreciated the Obas for endorsing the governor for second term, noting that he would convey their messages to the governor.

“So, I really thank you very much for this. “This is well-acknowledged and will go down the history of this state that a running government is appreciated by the traditional rulers.

“Repetition does not improve argument, so I will not repeat what the traditional rulers have said, but our achievements have been well-articulated.

“I want to tell you that we will not relent. We will continue to do our best to move Oyo State forward in line with the vision of His Excellency.

“As traditional rulers who appreciate the good works the government is doing across the state, I want to beg that you continue to pray for the governor.

“Wherever you feel you can make corrections, please don’t hesitate to table it before us.Your duty is to advise us from time to time and this is one of the essence of this meeting we are having today.

“When I spoke with the governor about your coming, he asked me to really appreciate you all for the visit. “He equally asked me to tell you that he is aware of the challenges each zone in the state is facing and would tackle them as a government.

“So, this is why I can say that there is still more to do and we need your support to actualise what we want to do for the state.”On the request by the Okere of Saki for a review of the Oyo State Chieftaincy Law, the Acting Governor said he has documented the issue and others and that the governor would be adequately briefed.

“I have documented some concerns raised and when the Governor returns, he will be briefed. The Chiefs Law that is being operated now was prepared by me in 2022 and if there is a need to amend, and I can assure you that it will be brought to the attention of the governor.

The event had 41 leading traditional rulers in the state in attendance.