Naijanewshub.com.ng reports that the National President of the Immigration Officers’ Wives Association (IMMOWA) has on Friday at the inauguration a Baby Care Centre at the Immigration Headquarters in Ibadan maintained that the centre was constructed to enhance officers’ productivity.

Inaugurating the centre, Jere said that the centre would enhance the productivity of officers, especially the nursing mothers who are always worry about the care of their babies while at work.

The chairperson said that the nursing mother officers need not to worry anymore, while at work.

She said that with the centre now at their working place, their children would be closer to them and in safe hands and good environment.

“This is a win-win situation for both the employees and the employers for better productivity.

“IMMOWA members are homemakers, do not relent in supporting your husband in planning, managing and organising activities at the home-front,” she said.

Jere, then called on IMMOWA members not to relent in supporting one another, urging them to make their husbands happy and in good state of health and mind.

In his remarks, the Comptroller, NIS, Oyo State Command, Isah Dansuleiman, thanked members of the association for their contributions to the welfare of officers.

Dansuleiman urged them not to relent in their dream of building a Nursery and Primary School.

He said that the Baby Care centre would give the nursing mother officers the opportunity of attending to their babies adequately when necessary. 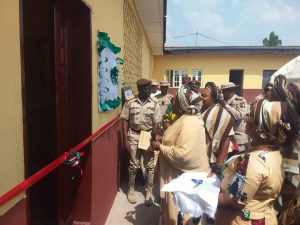 In her remarks, the IMMOWA Chairperson in Oyo State, Hajia Bilikis Dansuleiman, thanked the association National Chairperson for honouring the invitation for the inauguration.