Suspected abductors terrorizing the people of Igana and Ogbomoso axis have been paraded in Oyo state Police Command Headquaters. 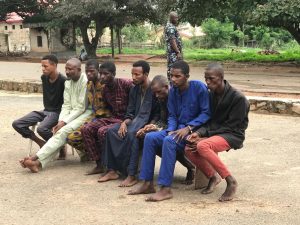 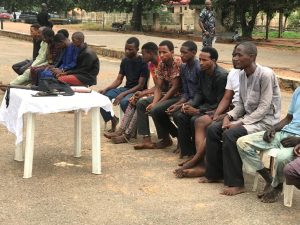 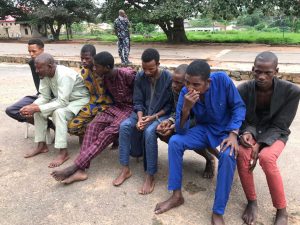 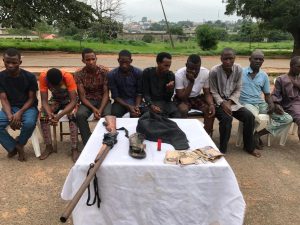 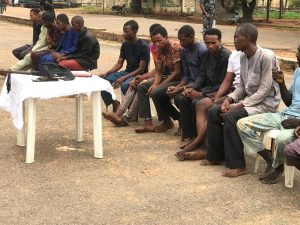 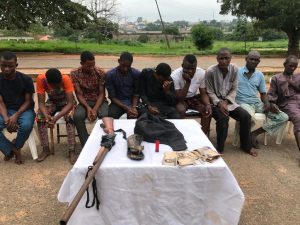 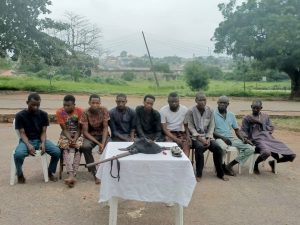 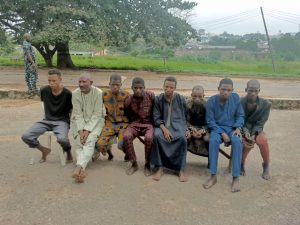 Naijanewshub.com.ng reports that the Oyo State Police Command has on Friday 17 paraded suspected kidnapping syndicates terrorizing the people of Igana Iwajowa local government area, as well as Ogbomoso axis of the state.

SP. Olawale also said that some of the paraded suspects were responsible for the abduction of the farm manager of the ex-governor of the state, late Otunba Christopher Aloa Akala, one Christopher Taiwo Bakare who was kidnapped on 16th July, 2022.

Osifeso in his address said, “in a bid to rid the state of criminal and unscrupulous elements the Oyo State Police Command under the constructive leadership of CP. Adewale Williams has completely rejig the command’s security architecture to cater comprehensively and qualitatively for all and sundry the command in concept with communal partnerships relevant sister agencies and non state actors have been able to collectively meet up and resolve the yearnings and concerns of the good people of Oyo state regarding emerging and existing security threats to include armed robbery, defilement and kidnapping.

“To this effect the command today, Friday paraded the abductors of one Christopher Taiwo Bakare male and Dr. Rasheed Oladoye male who were kidnapped on the 16th and 22nd of July at Jabata and Gbede via Ogbomoso axis respectively.

“So also operatives of the command attached to Igana Divisional Police Headquaters through intelligent driven surveillance and painstaking investigation around Igana, Iwere Ile, Ijio, all under Iwajowa Local Government Area of the state.

“To this end, the commissioner of Police, CP. Adebowale Williams appreciate the residents for their support and enjoyed them to be unrelenting and generous with the provision of credible and timely information capable of nipping crime in the bud at all times.

In his detail analysis of the suspects, Osifeso noted that Anjola Abubarkar, Sani Abacha Abdulahi, Sank Abacha Jafaru, Sale Mohammed, and Isah Seriki were responsible for the kidnap of the Akala’s farm manager, while Umar Abubakar, Mustapha Baruguma, Aliu Jafaru were responsible for the kidnap of Dr. Rasheed Oladoye, he maintained that the suspects have confessed to the crime and they are under open interrogations, as they are helping the police with informations that will be of a great help to the command.

One of the suspects,One Abudulahi Muhammed aged 42, a residents of Igana, in his confession to journalists said, “I was arrested for kidnapping one Alhaji Yahyah, I’m active member of the kidnap syndicate, I have been on kidnapping business for over two years and the first victim we kidnapped last gave us a ransom of 1m and I was given 150k as my share of the money, we used to operate anywhere that is conducive for us in Igana area.

Exhibits recovered from the suspects are one dane rifle gun, detachable hood cap, one expended cartridge, sum of twelve thousand naira and a pair of one slippers.