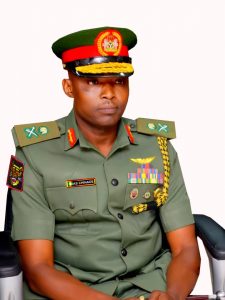 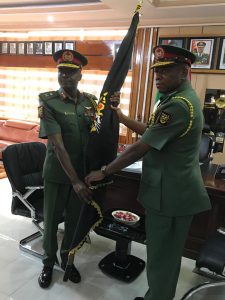 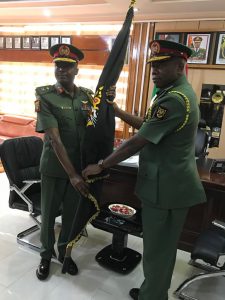 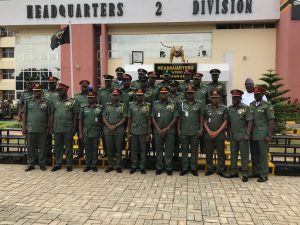 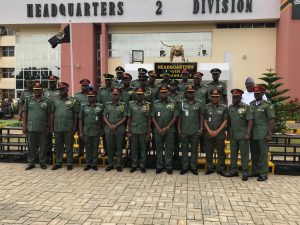 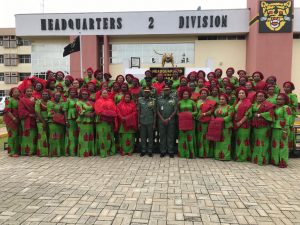 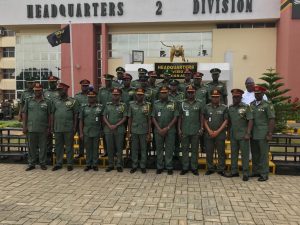 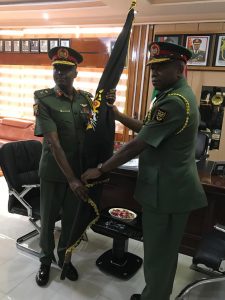 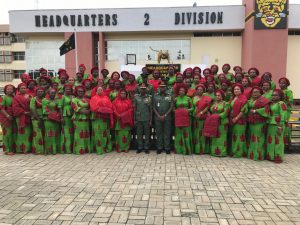 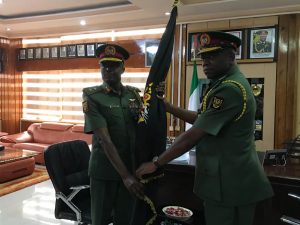 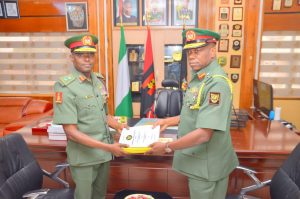 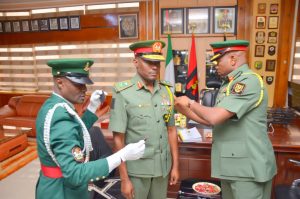 Maj. Gen Aminu Chinade redeployment was in line with recent directives by the Chief Of Army Staff, Lt. General Faruk Yahaya, that all the General officers commanding (GOC) and some senior officers across Nigerian Army units and formations should be redeployed with the aim of reposition the army operational efficiency and proficiency.

Gen. Aminu Chinade was received at the 2 Division Headquaters on Friday morning by the outgone GOC of the Div, Maj. General Gold Chibuisi and some other senior officers of the cantonment.

In his address, Gen. Chibuisi called on soldiers of the division to extend the much needed support to the new GOC.

He said, “As much as you know as a soldier that everybody come to serve his term and leave when it is time, but one thing that we are all working towards is to upholding on the security of our dear country. I urged you not to draw back, don’t sleep in your fighting for the unity of our dear nation, make sure that our barracks and all the area of operating is safe, keep them off, don’t get involved in illegality, stay on your lane as a professional soldier, don’t allow anybody to entice you.”

“I want to gladly see you again in the future, so don’t soil your image, take good care of your families, I’m very proud of you in this division, especially those of you in Ibadan, largely you are disciplined and you make it easy for people to do army work with you, just keep it up and I expect you to extend the same support to the new GOC, major general Chinade. Good enough he was here as a divisional training officers, so some of you knew him already, make sure that you keep the flag of the division very high so that whenever I see you in the future I can boldly say that is my division.”

“Please sustain the good works. In the work of the Army there is much to do, I’m just going to another part of the country to work, so I’m going but I’m still very much around, but I want you all to know that the Army is one and we are doing our task together and we will all succeed together, on that note I thank you all for the memorable times I have had with you as General Officer commanding of this division I thanks you all for being part of the successful story, I thank both the formations, the units, and of course the division and as an individuals, I wish you all the best.” General Chibuisi said.

The outgone GOC, Major General Gold Chibuisi handed over the flag of 2 division to Major General Aminu Chinade who was a Commandant Nigeria Army Department Zaria, he resumed duty as general officer commanding of the 2 division on 11th March, 2021 and has been redeployed to the Chief of Army Staff Office Abuja as Director, on Friday 12th August, 2022.