Naijanewshub.com.ng reports that Oyo State Government has promised to continue to celebrate personalities who have done the state proud in different fields.

The Special Assistant to Governor Seyi Makinde on Diaspora, Mrs Funmi Arulogun, stated this during a special programme organized in honour of an outstanding Sports Administrator, Mr Olalekan Adeyemi, who had served the state for years. 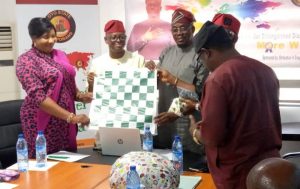 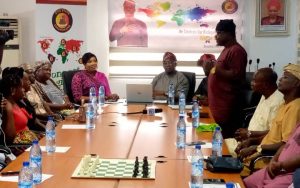 Arulogun bestowed honour on the good ambassador of the State as he was hosted at a special programme.

Speaking at the event, which held at the Conference room of the Head of Service, Secretariat, Agodi, Ibadan, Arulogun charged the citizens of the state in diaspora to be good ambassadors irrespective of the challenges they may be encountering.

Arulogun, however, bestowed honour on Mr Olalekan Adeyemi, a seasoned Sports Administrator, chess player and coach, who has also distinguished himself as a good ambassador of the State, and was hosted at a special programme.

Adeyemi, the former Chairman of the Oyo State Chess Association, who had represented the state and the nation in International Chess and Hockey competitions with medals to his credit, had also tutored National and International champions as a coach.

While calling on Nigerians in diaspora to come home and invest in hospitality business and Solid minerals, she commended the state Governor, Engineer Seyi Makinde, for creating enabling environment for businesses to thrive.

In his remarks, the honoree, Mr Olalekan Adeyemi, expressed gratitude to the present administration in Oyo State for recognizing and celebrating hard work, noting that the past administrations in the state had only allowed his labour go in vain.

The Program was graced by his family, friends, people from diaspora, and some Special Assistants to the State Governor.