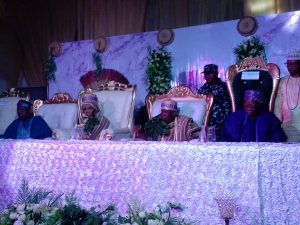 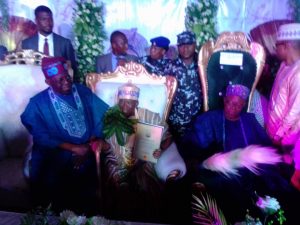 As the Kano sate governor called on Nigerians to continuously promote national integration toward engendering a united Nigeria.

He made the call on Saturday at the ancient Mapo in Ibadan after he and wife were honoured with chieftaincy titles by Olubadan of Ibadanland, Oba Lekan Balogun.

Two hours after their cultural title, the league of Imams and Alfas Yorubaland, Edo and Delta States also conferred Aladeen Yorubawa on Governor Ganduje at a colourful ceremony held at the palatial Palace of Onimalu, Asiwaju Mutiullai Oladejo, the Asiwaju Adinni of Ibadanland.

He recalled the age-long friendship between Kano and Ibadan, saying the two old cities would sustain the friendship and extend to other parts of the country.

According to him, “We are grateful to the Olubadan, Olubadan-n-Council and Ibadan people for honouring us with this prestigious titles. This gives us motivation and encouragement to do more in promoting unity.

“You made history today in terms of promoting national integration. This is a topical and very important issue we must always discuss as well as promote to achieve peaceful coexistence among Nigerians,” he said.

The governor thanked Tinubu for gracing the occasion, expressing confidence that Tinubu would promote the concept of national integration.

Tinubu, a former Lagos Governor, said that giving out such chieftaincy title to a non-indigene was a rare privilege.

He described the honour bestowed on Ganduje and his wife as well deserved, saying it was a demonstration of unity between the North and South.

The former Lagos governor appreciated the traditional ruler as well as Ibadan Indigenes for honouring his friend with a chieftaincy title.

The APC presidential aspirant urged the people to always promote national unity, saying such would engender national growth and development.

Prof. (Mrs) Elsie Adewoye, the President, University of Ibadan Alumni Association, described honour bestowed on Ganduje, who is an alumnus of UI was well deserved.

“It is a deserving honour. It is not fluke or propaganda. I have been to Kano and saw all these dividends of democracy,” she said.

Earlier, Oba Balogun, said that Ganduje and his wife were detribalized Nigerians, adding the honour was well deserved.

The traditional ruler narrated how Oba Yoruba Kano, Alhaji Muritala Alimi, introduced the Gandujes to them as detribalized Nigerians.

“We were made to know how supportive our guests were to the aspiration and eventual emergence of our brother as Oba Yoruba Kano about two years ago.

“We recall how Ganduje came down to Ibadan when there was a clash between Hausa traders and the people of Sasa at Sasa Market to calm the frayed nerves and peace was restored.

He said that Ganduje was currently building an auditorium for the university, adding that the project has reached 70 percent completion.

Balogun said that the conferment would further cement the bond of friendship that had long existed between the Ibadan and Kano people.

The traditional ruler said that it would go a long way in maintaining handshake across the Niger and engender the much sought-after unity which has turned fragile over the years.

“The Gandujes, being our in-laws in Ibadan through their daughter that got married to our son, Idris Ajimobi have done it all.

“Bestowing a befitting Chieftaincy title on the hardworking and amiable governor with his wife will be a reward for a man who has been compassionate to us as a people.

“And who believes that any Nigerian can stay and work in any part of the country without molestation or denial of basic things of life”. 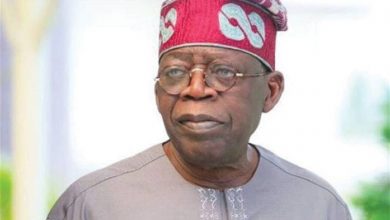