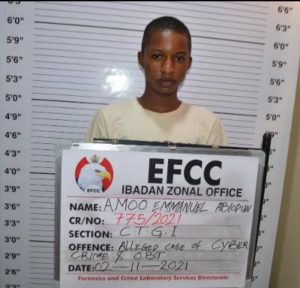 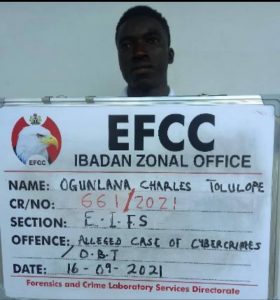 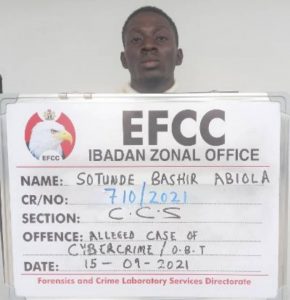 Two Internet fraudsters have been jailed in Ibadan.

Naijanewshub.com.ng reports the Ibadan Zonal Command of the Economic and Financial Crimes Commission, EFCC on Thursday, July 14, 2022, secured the conviction and sentencing of the duo of Ogunlana Charles Tolulope and Amoo Emmanuel Abiodun on separate one count charge before Justice Uche Agomoh of the Federal High Court, sitting in Ibadan, and Justice Bayo Taiwo of the State High Court, Ibadan, Oyo State.

The convicts according to a press statement signed by the Head of Media and Publicity of EFCC, Mr. Wilson Uwujaren were arrested by the Ibadan Zonal Command of the EFCC sometime in the year 2021 for cyber-fraud related activities in Ibadan, Oyo State.

A copy of the statement dated 15 July, 2022 made available to INDEPENDENT stated that the charge against Ogunlana reads: “That you, Ogunlana Charles Tolulope ‘M’(aka Brandon Oliver) on or about the 8th of September, 2021 within the jurisdiction of this Honourable Court did fraudulently impersonate one BRANDON OLIVER a male citizen of the United States of America via your Google Hangouts brandonoliver101@gmail.com and oliverb909@gmail.com with intent to gain monetary advantage for yourself, the pretext you knew to be false and thereby committed an offence contrary to Section 22 (2) (b) (i) and punishable under Section 22 (3) of the Cybercrimes (Prohibition, Prevention, etc.) Act, 2015.”

The charge against Amoo reads: “That you, Amoo Emmanuel Abiodun on or about 29th October, 2021, at Ibadan, within the jurisdiction of this Honourable Court, with intent to defraud, impersonated Clifford Smith, a white man from United States of America and thereby committed an offence of Impersonation contrary to Section 484 of the Criminal Code Law Cap 38, Laws of Oyo State, 2000.”

They pleaded guilty to the charges preferred against them by the EFCC.

Consequently, Justice Agomoh convicted and sentenced Ogunlana to one year imprisonment and ordered him to restitute the sum of N1, 600,000. 00 (One Million, Six Hundred Thousand Naira) domiciled in his bank account too his victim and forfeit one Camry car to the Federal Government of Nigeria.

Similarly, Justice Taiwo convicted and sentenced Amoo to six months community service and ordered that the convict pay the sum of $1,300USD (One Thousand Three Hundred United States of America Dollars) in restitution and forfeit one iPhone 11 mobile phone to the Federal Government.

In a related development, the Ibadan Zonal Command of the EFCC arraigned one Sotunde Bashir Abiola before Justice Uche Agomoh of the Federal High Court, on one count charge bordering on fraudulent impersonation.

The charge reads: “That you, Sotunde Bashir Abiola ‘M’ sometimes in March, 2021 within the jurisdiction of this Honourable Court with intent to defraud aided and abetted one Ashefon Daniel Kayode who fraudulently impersonated one Robbin Stephen with intent to gain advantage for himself and thereby committed an offence contrary to Section 27 (1) (b) of Cybercrimes (Prohibition, Prevention, etc.) Act, 2015 and punishable under Section 22 (2) (b) (iv) of the same Act.”

He pleaded not guilty to the charge when read to him before the court.

Justice Agomoh, ordered that the defendant be remanded in the Agodi Correctional facility and adjourned till November 2, 2022 for the commencement of trial.