Naijanewshub.com.ng reports that the Immediate President of the Rotary Club of Ibadan Ibadan – Jericho Metro and Chairman of Rotary International District 9125 Zone 1 Family of Rotary Day Planning Committee Rtn. Samuel Kolawole, has disclosed the readiness of the Rotary to impact communities positively more than ever before. 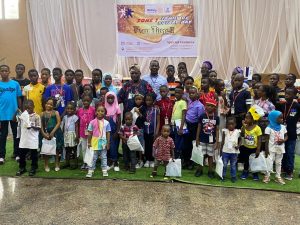 Kolawole stated this at the Zone 1 Family of Rotary Day held at Kakanfo Inn and Conference Centre, Ibadan, where members celebrated with their families and friends.

He mentioned that similar events are being held in other Zones in District 9125 under the leadership of the District Governor, Rtn. Goddy Nnadi, PhD, mni.

Rotarian Samuel Kolawole, emphasized the importance of the event as opportunity for Rotarians to bring their family members and friends together in an atmosphere of fun with a view to introducing them to Rotary as some of them, seeing what Rotary is all about could eventually join Rotary Club and become part of the efforts to impact their communities positively.

The event also witnessed reaching out to children of Rotarians through gift packs with educational contents like story books, jotters, pens and Mathematical sets.

In addition, the children also participated in competitions and won book prizes. All these are also aimed at impacting the society positively and promoting Rotary’s role as a service organisation.

Kolawole said there is so much to be done by Rotary clubs in Zone 1 as they want to impact more in healthcare, education and in all Areas of Focus of the organisation to their communities.

He said: “Family of Rotary Day is an event that Rotary has every year. This year, we are celebrating it here in Ibadan. Zone 1 covers covers Oyo, Osun, Ekiti, Ondo and Kwara states in District 9125.

“Rotary does a lot of projects that are impacting the society positively and we still want to do more and in doing that, we commit time, by putting in a lot of work, so, at the end of the year, we bring together members of our families, friends and other people who we believe have the potential to be a Rotarians. This is because all the projects that we do, we can’t raise the funds alone. So, we invite those who have potentials to join us in impacting communities around us positively through various intervention projects.

“You can see that the children who came were given packs which are educational in nature; that is also impacting the society.

Speaking about their next plan, Kolawole said: “For Rotary, our year begins in July and ends in June, so by the end of December, we would have finished the half year and we are going to review our performance in the goals we have set.

“We want to impact our communities positively in different ways. For example, we are going to be doing some projects on health later this month with other great projects in the next half year.”

In his remarks, the District Governor’s representative, Rotarian Olusoji Sangobiyi, lauded the committee for the programme and noted that there is a lot of improvement in this year’s family Rotary Day.