Naijanewshub.com.ng reports that  the former Registrar of Atiba University Oyo, Ambassador Ibilade Adesokan has expressed his gratitude to the Management of the Prowess University Delaware United State of America over for honoring him with an Honorary Doctorate Degree Award. 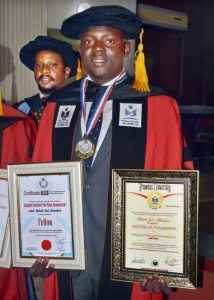 Adesokan was been awarded with an honorary doctorate degree in Peace and Conflict management from the Prowess University Delaware, USA alongside other prominent Nigerians for their contributions to the development of their people.

Receiving the award on Saturday at the Balogun Subomi Hall, University of Ibadan, during the leadership summit /Induction and honorary doctorate degree award event of the institution, Adesokan who is also an educationist and travel expert promised to continue with his commitment to humanitarian service.

Adesokan at the event shortly after he received the award from the Africa Representative of the institution, Prof. Eze Nwauba said, “I’m so honored and happy receiving this Honorary Doctorate Degree Award from the Prowess University Delaware United State Of America.”

“This showed that they recognized my little contribution to the development of my people and my society at large, even from far distance, on this note I’m pledging to continue with what I’m known for, which is promoting humanity through my philanthropy gesture. Today I’m so happy and full of joy receiving this award, this means a lot to me and my family at large.” Adesokan said.

Also in his address, Professor Eze Nwauba stated that the recipient was honored for his laudable impact on the lives of people.

Prof. Eze further added that Adesokan is selected after an evaluation on the impression made in the lives of people.