Engr. Seyi Makinde, the Executive Governor of Oyo state has on Thursday laid wreath on his parents’ tombs.

Naijanewshub.com.ng reports that Governor Makinde led his siblings and family members to lay wreaths on the tombs of Pa Makinde, and his mother,  Mrs. Abigail Makinde, at the Cathedral of St Peters, Aremo, Ibadan.

Makinde in his speech said that he and his siblings were grateful that the parents laid a solid foundation for them to build on.

A statement by the Chief Press Secretary to the governor, Mr. Taiwo Adisa, quoted the governor as telling the gathering, which included top government functionaries and family members, that his father, who died 10 years ago, was happy at what is happening behind him.

He said: “Let me thank you all for joining us for this short programme.

Actually, at the day breaking yesterday, I saw my father in my dream and we were just joking around. In my thought, I felt I saw happiness with him where he is. So, I said I would wear Agbada for this event, which I don’t usually do.

“Exactly this time 10 years ago, I was struggling to come to terms with losing my father. As a matter of fact, I was all over the place and told him not to ‘go.’

“Today, I am appreciating my daddy (and my mummy also),  especially for the lessons he taught me in life, which I will like to share with everyone.

“My father always said a life that is lived with integrity, even though it may not have the trappings of riches and fame, but can actually be the light that will show the way for others who are coming behind, is worthy and that is exactly what we have seen here today.

“He was a primary school teacher, whose life was not with any trappings of fame but gave his children the light that pointed to the direction we should follow.

“Just the way the Bible also points it out – train up your child in the way he should go, so that when he grows, he would not depart from it.”

In his short sermon, the Bishop of Ibadan Anglican Diocese, Most Rev. Joseph Akinfenwa, said that the late Pa Makinde had positive impact on his children and that was the reason he was being remembered  by the children.

“If he had not had impact on his children, they would not have remembered him 10 years after, not even 10 months after,” the Clergyman said.

According to him, the art of wreath-laying to remember loved ones started in Ancient Greece, adding that  wreaths, in most cases, are always in circles and are decorated with flowers to signify eternal life, beauty, and memorial.

He said: “So, when we see wreath being laid, it connotes the importance of the departed to the layer of the wreath, which we are doing today.

“If Papa had not had impact on his children, they would not have remembered him 10 years after, not even 10 months after. If he had not done the expected duties of a parent to the children, they will not remember to come to do this.“

“By the way, remembrance is a gift of God. It is one special aspect of nature God has given us. So, I believe His Excellency, even right now, will remember the way his father used to speak, smile, walk and smacked him when he has done wrong.

“These are the gifts of memory and it gives us a kind of joy that we can visualize. We receive a kind of contentment that they are still with us even though, in body, they had departed, and that gives us joy and peace of mind.” 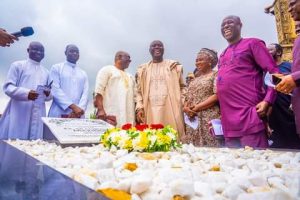 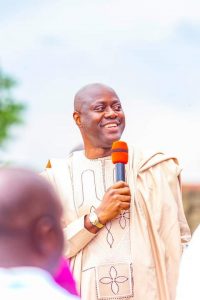 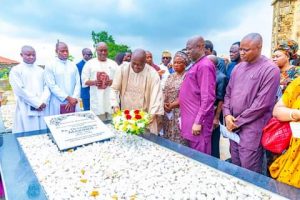