Naijanewshub.com.ng reports that the Arole Oduduwa & Ooni of Ife, Ooni Adeyeye Enitan Ogunwusi Ojaja II, on Friday renewed his unending call for love and unity of all descendants of Oduduwa, noting that such gesture will further enhance the prosperity of the Yoruba people wherever they might be in the world. 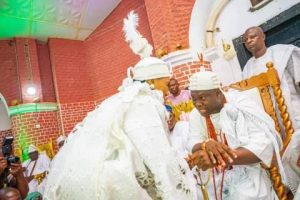 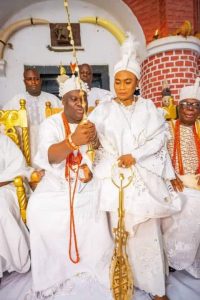 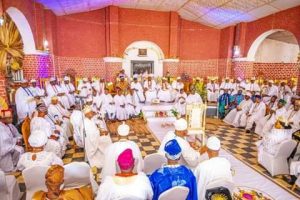 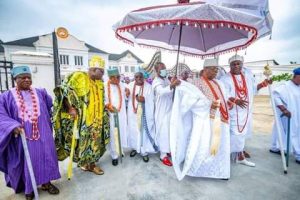 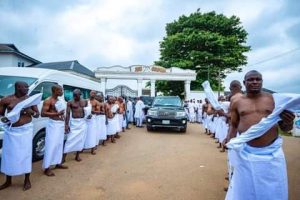 Ooni Ogunwusi who is the co-chairman of the National Council of Traditional Rulers of Nigeria made the call at the Ile Nla auditorium of his Ile Oodua Palace, Ile-Ife while installing the Erelu Kuti IV of Lagos, Erelu Abiola Dosumu, as the Yeye Oodua and Queen Mother of the House of Oduduwa.

The Ooni explained that descendants of Oduduwa must be united and agree even as they respect one another’s stance on politics, religion and other sentiments for peace and development across the land.

Justifying the choice of Erelu Dosumu, the Ooni said, “It is an unanimous decision of the Ife Traditional Council and major stakeholders of Oodua race, agreeing that her character, personality and her wealth of experience as an international business woman, a royal ambassador and a great icon of the African culture  perfectly qualify her to step into the big shoes earlier worn by late Chief Mrs  HID Awolowo as  the immediate past Yeye Oodua.

“In almost half-a-Century of public life, Erelu Dosumu has proven herself to be an outstanding woman of stamina, integrity and far-reaching influence. In 1980 late Kabiyesi Adeyinka Oyekan, the Oba of Lagos, installed her as the Erelu Kuti IV of Lagos. With that appointment, she became the right hand person of the Oba of Lagos. Since then, she has executed her charge with maturity, sagacity, courage and commitment. Indeed since then, the beautiful and ageless Queen mother, has become an enviable cultural Face of Lagos; its traditional allure and ageless charm.” Ooni said.

While making her speech  during the ceremony, the newly crowned Yeye Oodua expressed profound appreciation to Ooni Ogunwusi,  Ife indigenes and Oduduwa Race worldwide for   the honour bestowed on her and  her family with the highly exalted position. She promised to work assiduously for the preservation the Yoruba culture and strengthen the unity of members of the Oduduwa race globally.

“I am honoured to be recognised by the Arole Oodua,, and being singled out among the great and deserving women of our time. This is a huge responsibility and I strongly believe that during my time, I will work assiduously to preserve our culture and strengthen the unity of Yoruba land. I am grateful for the prayers and the huge turnout of friends and families who came from far and near for this important occasion”. Yeye Oodua said.

The cultural event which was attended by prominent personalities across the country, was heavily attended by notable Yoruba traditional rulers including the Orangun of Ile-Ila, Oba Wahab Oyedotun