Naijanewshub.com.ng reports that In their efforts to assist the government in bringing the desired development to both the health and education sector in the state, members of Socio-Cultural group known as Omo Aj’orosun Club Ibadan have collectively donated mattresses, pillows and wheel chairs to some selected hospitals and school for the handicaps in Ibadan metropolis.

The development according to the chairman of the club, Alhaji Abiola Alli is aimed at assisting the government in providing more friendly environment for the less privileged, as well as supporting the government in providing affordable health care service delivery system for the residents of the state, most especially the indigenes and residents of Ibadan metropolis.

Alli in his speech further maintained that Omo Aj’orosun is a club noted for helping the less privileged in Ibadan and Oyo state at large, stressing that the club has taken it as its responsibility to assist the  government in its social responsibilities.

Alli however promised to continue to extend the hands of help to the less privileged in Ibadan metropolis. He also make use of the medium to appeal to the beneficiaries of the items to make good use of the items given to them.

“My advice to the beneficiaries is to maintain whatever the materials given to them very well, they should ensure that they maintain all the items very well because it is only when you maintain items given to you very well that other people will be happy to donate more and more for you”. Alli said.

No fewer than 105 mattresses as well as 105 pillows were shared among six health facilities located within Ibadan, the Capital City of the state. While School for the handicaps located in Ijokodo and Agodi benefitted respectively from the wheel chairs donated for them by the club.

Briefing journalists at Omo Aj’orosun Headquarters Total Garden, Agodi GRA Area of Ibadan, the venue of the event, shortly after the handling over of the items to the representatives of the health facilities and school for the handicaps, the project director of Omo Aj’orosun, an Ireland based Ibadan born philanthropy, who also represented Ireland Republic wing of the club, Mr. Kazeem Raheem stressed that the gesture was born out of the zeal to assist the government in making life more meaningful to the masses.

Kazeem said, “This initiative is a collective one and it is aimed at helping people of our immediate communities. We were all here before went for greener pastures in the foreign land, we were born and bred here in Ibadan, before we left, and we think out of the box to see how we can better the lives of our brothers and sisters and that is what we are doing here today through our able club, Omo Aj’orosun Club of Ibadan, under our able leader, Alhaji Abiola Alli.

In her remark, the secretary to Oyo state government, Mrs Olubamiwo Adeosun who was represented by Director of Maintenance at Governor’s Office, Mr. Solomon Bamigbola appealed to all other Socio-cultural group and well meaning Nigerians in the state to collaborate with the state government in delivering quality health care to the grassroot.

She however urged the beneficiaries to make good use of the gift items handed over to them judiciously for the benefit of the people at the grassroot.

***Pictures Of The Event… 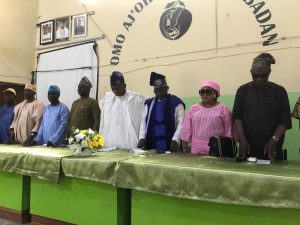 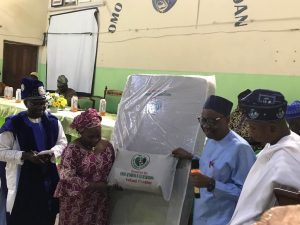 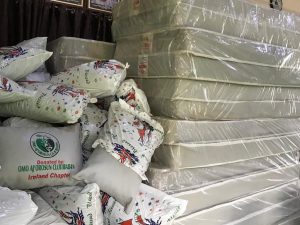 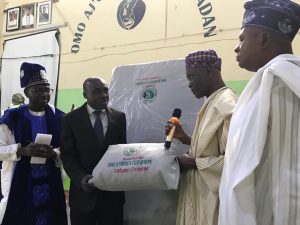