Customs has handed over N6b Tramadol To NDLEA.

Naijanewshub.com.ng gathered that the Nigeria Customs Service(NCS) Apapa Command has disclosed seizure of prohibited dosage of tramadol with a street value of N6billion. 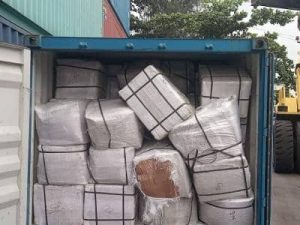 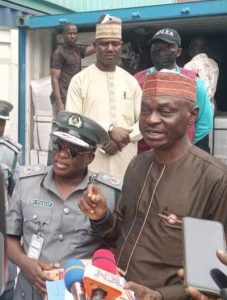 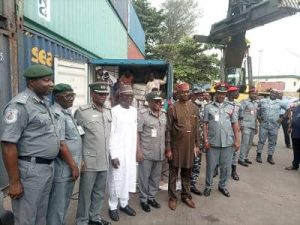 Malanta, who showed the seizure concealed in  a 20 foot container and packed in 150 Cartons, said the illicit drugs were from Pakistan.

He said the drugs were concealed carefully with towels, but we’re uncovered through the eagle eyes of officers who deployed what he called “Forensic Manifest Management System”.

Giving a breakdown of the seizure, while handing it over to the National Drug Law Enforcement Agency (NDLEA), said:  “On the authority of the Comptroller-General of the Nigeria Customs Service, Col. Hameed Ibrahim Ali (Rtd), I, Comptroller MI Yusuf, Customs Area Controller, Apapa Command do hereby handover 1x20ft container No. PCIU 0183241 laden with eighty-one (81) cartons of 250mg and sixty-nine (69) cartons of 225mg of tramadol tablets (Each carton contains 72 rolls, each roll contains 10 packs, each pack contains 10 sachets, and each sachet contains 10 tablets) totaling 150 cartons of tramadol tablets to the Commander of Narcotics, Commander Ameh Inalegwu, Apapa Special Area Command of the National Drug Law Enforcement Agency (NDLEA) for further agency action.”

The customs boss disclosed that one suspect was arrested in connection with the seizure and have also been handed over to the NDLEA for further interrogation and investigation.

According to him, the handing over is to further strengthen the existing relationship between the Nigeria Customs Service, the NDLEA and other relevant government agencies operating in the port.

“The fight against illicit drug abuse and trafficking is everyone’s business and the Nigeria Customs Service is all out to support the NDLEA in combating this ugly menace decisively.

“We have just started, we would make sure that all these illicit drugs have no place in Apapa command,” he said.

“The drugs were concealed with towels, and the true content of the container was not declared. However, the customs deployed what he called “Forensic Manifest Management System” to bring out the contents of the container,” he said.

“I want to appreciate the synergy between the Apapa customs command and the NDLEA, just about a month ago, we had this kind of handing over whereby two containers were handed over to us, this is the Apapa spirit, my Chairman is very appreciative and he is ready to project and commend any officer of the security agencies that would partner with the NDLEA.

“I want to commend the Area Controller and say that my Chairman is very proud of you, when I had the opportunity to put the records before him, he assured me of the length he would go to recommend you and I am sure it is on the way, if it has not come” Inalegwu stated.

Inalegwu, a Commander of Narcotic, added that “The legally accepted milligram for tramadol is 50mg, but here we have five of that in one, under the influence of this drug, everybody is vulnerable.

“A carton of the tramadol is not less than N20million, while the entre drug is worth more than N6billion.

“The agency is going to the court to get permit in order to destroy the drugs, in the next one month, my Chairman would be in Lagos to destroy exhibits” he concluded.