Oyo NAWOJ has demanded for justice over alleged sexual abuse of students of FGGC Oyo.

Naijanewshub.com.ng reports that Oyo NAWOJ In its response to the petition written by the concerned parents of the Federal Government Girls College (FGGC) Oyo over alleged rape and sexual abuse of their children called for justice for the affected students of the college.

The Nigeria Association of Women Journalists, Oyo State Chapter while hosting aggrieved parents of students of FGGC Oyo on Sunday that stormed Oyo NUJ Headquaters Iyanganku Ibadan, the Capital City of the state to register their displeased over alleged assault of on their children by some teachers of the college condemns in strong terms, any form of violation against the rights of any child in the state.

Addressing journalists on the development, Oyo NAWOJ Chairperson, Comrade Jadesola Ajibola stressed that as women journalists in the state, which also saddled with advocacy for all gender especially women and children cannot close our eyes to this menace that can truncate the future of our children.

She said, “Our attention has been drawn to the alleged continuous harassment and molestation of some school girls by teachers over the years with many cases swept under the carpet.”

As an association that advocates for child rights, we cannot close our eyes to this menace that can truncate the future of children especially when we consider the fact that we have been invited to take on the case.”

“We were told by concerned parents of the school in a petition to our state chapter that many girls have been regularly abused and violated by persons who are expected to by teachers, guardians and mentors to the students.”

“The parents further alleged that the management of the school had been covering up such incidents in the past few months and refusing to take disciplinary actions against the perpetrators when such cases are reported.”

“Oyo NAWOJ condemns in strong terms, any form of violation against the rights of any child in the state, we believe that by now the leadership of the school ought to have set up a panel to investigate this dangerous trend reported by concerned parents of the school.”

“As an association, we want to first commend the Oyo state police Command under the leadership of the new Commissioner of Police, CP Adebowale Williams (psc) for taking up the recent incident involving a 14 year-old girl who was sexually molested and abused by her teacher.”

Oyo NAWOJ in its demand urged the police command to speed up investigations and start prosecution of the accused teacher before a court of competent jurisdiction within the state without delay.

Jadesola however called on the Minister of Education, Adamu Adamu to immediately set up an investigation panel to look into the alleged girls’ molestation, sexual harrassement and all forms of abuse against girls in FGC, Oyo.

She also called on the Registrar of the Teachers Registration Council of Nigeria, Professor Segun Ajiboye, who is an outstanding indigenous son of Oyo state to investigate the attitude of these registered teachers without delay ans take appropriate action.

She maintained that, as the alleged perpetrators are undoubtedly members of the Nigeria Union of Teachers, we call on Comrade Raji Oladimeji to look into this issue further.

“As an association, we will not relent on our oars until we get justice for the survivor of the recent abuse, a minor who was regularly sexually abused and violated and other victims in that school.”

“Oyo NAWOJ also asked that the Federal Government who owns the school to set up a committee and make Oyo NAWOJ one of the members to investigate the alleged sexual abuse perpetrated on these students and bring any erring staff to justice.”

“We demand the immediate suspension of the principal to allow thorough investigation on the matter and the PTA chairman also should resign with immediate effect as the concerned parents claim they no longer have confidence in your leaderships as it portends more danger to the lives of the girls in the school.”

“We call on His Excellency, Governor Seyi Makinde and the First Lady to also support us in ensuring justice for the victims and provide more protection for pupils and students in the state.”

“We wish to also warn others who are constantly engaging in this inhuman act to stop it immediately as the law will surely catch up with them in a short time. Parent are also advised to do more in ensuring the protecting of their children at all times.”

“Our Association remains the voice for the voiceless in the country. We will continue to respond to calls like this from other schools where some violators are still perpetrating such an act.” Jadesola said.

Speaking on behalf of the aggrieved parents, Hon. Adebowale Adebayo and Mrs. Faniyan Adetoun Nancy called for immediate sack of teachers involved in alleged rape and assault of their children. Stressing that the case has been happening over the years while all efforts and reports made by concerned parents to the school authority in order to prevent further occurrence of such evil act proved abortive.

Mrs. Nancy noted that the recent rape case involving a 14 year old girl of SS 2 of the college have started two years ago when the girl was twelve year old but the school authority kept mum over the matter.

The parents and Oyo NAWOJ however called for immediate removal of the chairman of the parents teachers association of the college until justice prevail over the case which is currently under litigation. 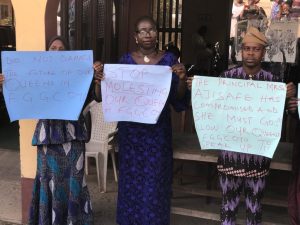 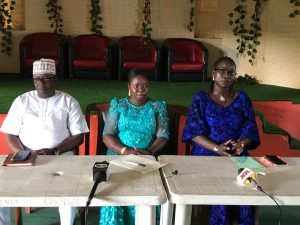 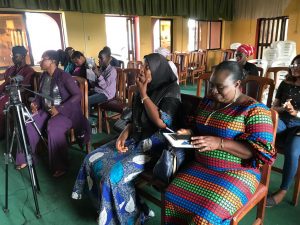 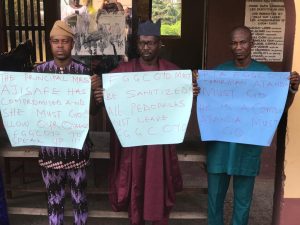 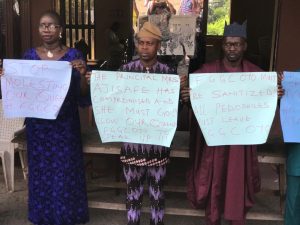