Naijanewshub.com.ng reports that the Ogun state chairman of National Rescue Movement (NRM) Evang. Adeshina Abraham has debunked rumour of taking over the party by one political party in the state as accused by some candidates of the NRM.

Evangelist Adeshina in a press statement made available to journalists made known the decision of the party stakeholders over the development.

A copy of the statement made available to Naijanewshub.com.ng  on Thursday stated as thus;

“Sequel to a press conference aired on TVC made by some candidates of NRM over alleged false and fake news relating to the National Rescue Movement (NRM) in Ogun state, I, Evang. Adeshina Abraham the state chairman of National Rescue Movement (NRM) Ogun State; the entire state Excos with our gubernatorial candidate, Dr Tofunmi Ogunronbi and his running-mate, Basorun Babafemi Branch do hereby debunk the press release of 3rd Jan. 2023 by some disgruntled members of NRM Ogun state.

The state NRM chairman through the statement further maintained that “I wish to make it categorically clear that we are not aware of the press release of Jan 3rd or the purported movements by the ADC and the gubernatorial candidate as claimed by these questionable individuals.”

“These individuals are not the party officials rather they are only candidates supposedly contesting in the forthcoming elections under the banner of the party.”

“Let me add at this point that the NRM national office is already aware of this undesirable Anti-party activity and are currently initiating disciplinary actions to be levelled against them.”

“This statement is not only a gross misrepresentation of the Party but also false and rife with malicious intent which can hinder the peace and progress of the state electioneering system.”

“I therefore, use this medium to call on relevant government agencies to sanction these individuals to back these allegations with proof failing which they should face the full wrath of the Law as they may deem fit. We reiterate that this act is condemnable and nothing short of defamation of character. 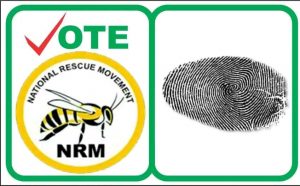 “Finally, the press release is totally Baseless, non of NRM state EXCOS aware of the move. Repeatedly these set of people are just candidates and not state working committee members nor executive members of our party, We Excos hereby dissociate ourselves due to their inordinate ambition and conducting ANTI – PARTY activities.” Evangelist Adeshina Abraham stressed.

Wike, Ortom, Others In Ibadan For Makinde's Re-Election Campaign