Governor Nyesom Wike and three others were in Ibadan for Makinde’s re-election campaign. 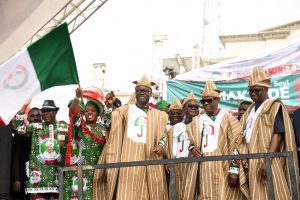 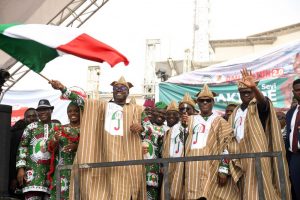 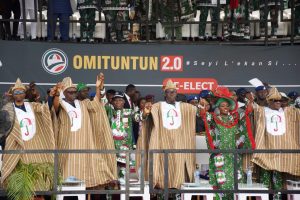 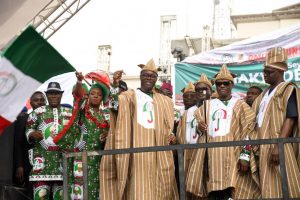 The four governors, who are members of the G-5 governors in their separate remarks, declared their support for the re-election bid of Governor Seyi Makinde at the flagg-off of the governorship campaign at Mapo Hill, Ibadan, Oyo State capital.

The governors, however, in their separate remarks kept silent on the presidential candidate to support in the forthcoming presidential election.

Addressing the Peoples Democratic Party (PDP) faithful, Governor Nyesom Wike of Rivers State, commended Governor Makinde for fulfilling his 2019 election promises to the people by transforming the state in terms of economy and infrastructures.

Governor Seyi Makinde in his remarks expressed his appreciation to the people and party faithfuls for entrusting the destiny of the state under his care assuring that more developmental projects and programs will be witnessed in the state if reelected for another term of four years.

Makinde, who boasted of jerking up the state’s internally generated revenue from about N1.7 billion to N3.8 billion as at November ending, 2023 among other achievements promised to do more for the people of the state.

Highlight of the event was the official presentation of PDP flag to Governor Seyi Makinde and all other candidates on the platform of the party in the forthcoming general elections.

PDP stalwarts and members of Atiku/Okowa presidential campaign organization including former Minister of state for FCT, Chief Jumoke Akinjide and other leaders from the south west zone of the party all attended the event in Ibadan.
Tags
Ibadan Makinde's Ortom Re-Election Campaign Wike