•••as Sowore Decries Lack Of Unity Among Yoruba Race

Kola Abiola has threatened to deal with agitators if elected as president of the federal republic of Nigerian.

Naijanewshub.com.ng reports that those agitating for the break of the country should by now have a re-think, as the Presidential candidate of Peoples Redemption Party (PRP) in the forthcoming 2023 presidential election Kola Abiola has threatened to come hard on them if elected. 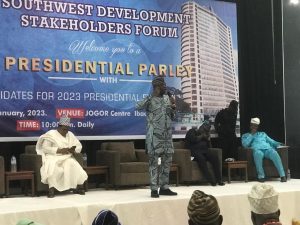 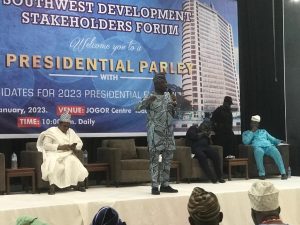 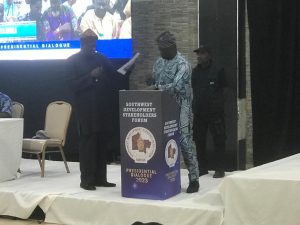 Kola Abiola speaking on Tuesday at a presidential parley organized by the South West Development Stakeholders’ Forum, in Ibadan described the agitators and their actions as treasonable offence.

Abiola, who declared that their actions as unconstitutional and also amount to treasonable, insisted that he would not accept any action that would threaten the unity of Nigeria.

According to him, his administration will encourage them if only it would not affect the unity of Nigeria, promising to turn the country around for the betterment of all Nigerians irrespective of tribe, religion or polotical affiliations

He promised to base his administration on true federalism, just as he bemoaned some state governors for their to implement the local government autonomy.

On the constitutional review, he promised to look into al past reviews with a view of getting an acceptable constitution for the country.

The PRP presidential candidate said Nigeria needs new set of leaders who have the interest of the masses at heart and urged the eligible voters, especially women not to mortgage their future of their children in the coming elections.

“We cannot move freely anymore because of insecurity, because of kidnapping and armed robbery; and that’s why we need to go back to community based policing where everybody will know what is going on in their respective areas. I will not allow anything that will affect the unity of this country. I will come hard on sessionists because their action is unconstitutional and amount to treasonable”, he declared.

Also addressing the forum, the presidential candidate of Action Alliance, Omoyele Sowore, lamented the lack of unity among the Yoruba race, saying most of the leaders have become bastard by working against the late Obafemi Awolowo and late Moshood Abiola from becoming the president of Nigeria.

He recalled the best achievements of late Awolowo, especially in the areas of education, health and housing, noting that many leaders were not fit to be at the helm of affairs.

“Many Nigerians abroad are ready to come back home only if Nigeria becomes better. We have people who can rebuild the country but they are not happy to return home. Nigeria as a country has challenges of electricity, security and enormous crisis and if care is not taken the challenges may become complex”, he said.

Sowore, therefore urged Nigerians not to vote for people who were not ready to work for the development of the country but only interested in their own selfish gains.

PREMIER HOTEL IBADAN TO BE REMODELLED INTO A 5-STAR HOTEL